The aim of this training is to recognize the exlibris and to produce exlibris with linoleum printing method which is one of the unique printing techniques of the individual.

The program learns linoleum printing technique and exlibris to produce in their own names. First, participants who prepare their own sketches with their own names or prepare sketches in digital environment, then use these high-tech techniques with black and white balance by carving these sketches on linoleum with the help of carving knives.

Case studies: The name, surname and exlibris text are hidden in the works. Only ex can be written instead of exlibris script.

14 and over can participate.

The exlibris or booklet is a small graphic label or print affixed to the inside cover of a book to identify its owner. Latin means ‘Ex libris …’ means the books of … and this is usually followed by the name of the owner of the book, which may be the individual or institution. In general, the exlibris is commissioned by those who want to mark the ownership of their libraries’ volumes more simply and in a more decorative and elegant way than to write their names. The printed exlibris has been used in this way for more than 500 years, but those previously hand-painted are known, and even small ceramic plates attached to papyrus scrolls say they belong to the Pharaoh Amenophis III library. Today, contemporary ex-libris are often made by artists for exchange among collectors rather than marking ownership of books. They tend to be closer to limited versions of free graphics than book pages. However, the real ex-libris is also widely commissioned, collected and examined for use in books.

How is exlibris made?

All graphic techniques that allow high quality multi-reproduction of an image have been used and used by artists for centuries. The first printed ex-libris was made around 1470, when Gutenberg’s first mobile edition led to the creation of printed books. Traditional techniques include relief printing (gravure, linocut, etc.), intaglio printing (gravure, etching, aquatint, etc.) and flatbed printing techniques such as screen printing or lithography. Often, industrial techniques such as line block, photo engraving, offset-litho are also used to produce ex-libris, especially when a large number of prints are required. Today’s artists and designers are increasingly using computer technology in the design of booklets. You can find a list of technical symbols for the various techniques used in the exlibris by clicking “Technical symbols” at the top of this page.

When ex-libris is produced with an original graphic technique, a print of 50 – 100 is printed and these are signed and numbered by the artist. Exlibris are rarely larger than 13 x 13 cm because they should fit in books. It is usually printed on fairly light paper (not more than 200g per m2) because a thicker paper prevents the book’s cover from lying flat.

What types of themes and images does the exlibris have?

A book or exlibris can change a simple label with a person’s name into a detailed piece of art (print) in which the name is carefully integrated into the design. When a booklet is created for a special collection of books, this is usually specified and can be in a modern language (for example, ‘astrology books’ by John Smith) or latin (‘Ex eroticis John Smith’). for erotic books; the address of the owner of the book (although this may vary!) or the year it was made and adhered to the bindings. Usually, the quality of the inscription is aesthetically important. a booklet as the quality of artistic design. Today, the subject or motif of an exlibris is infinitely variable. Until the 18th century, the booklets were mostly dynasty because people could recognize a crest even if they couldn’t usually read. They later became pictorial and tended to reflect the artistic tastes of the time. The subject represented by the artist in the library is generally related to the interests of the client: an amateur astronomer may have a booklet with telescope and stars. books to be pasted into. Sometimes the person whose exlibris is assigned suggests a theme and allows the artist to produce an unforgettable, beautiful image in which the name is integrated. Have you done many ex-libris to date? It is estimated that more than one million ex-libris were produced between 1470 and today. Basically a European tradition has spread to Asia (especially Japan, China) and a little bit of Latin America. Eastern Europe has a particularly rich tradition in graphic arts, and some of the best ex-libris produced today are made by Russian, Czech, Slovak or Southeast European artists. Over the centuries, most of the greatest artists have made exlibris (Dürer, Cranach, Hogarth, Boucher, Beardsley, Klee, Giacometti, Picasso, Dali) and many fascinating and diverse personalities to speak just about every part of life. He used them (William Penn, Lavoisier, Dickens, Bismark, Conan Doyle, Gloria Swanson, Mussolini, Charlie Chaplin, Queen Elizabeth II etc.) Some museums and public libraries contain booklet collections, some of which are open to consultation.

The Frederikshavn Museum in Denmark is said to have the largest public book collection. Why do people collect exlibris? In addition to a few isolated cases, in the late 19th century, people began collecting exlibris as a field of applied graphic arts of historical, artistic, sociological and bibliophile interest. Today, there are about 10,000 collectors all over the world. Often, exaggerated exlibris artists commission originally for change purposes rather than sticking to books. Bookplate exchanges cause extensive international communication among collectors who also gather at the congress of collectors, artists and exlibris researchers. There are more than thirty book collector associations worldwide, such as the Bookplate Society in the UK, Deutsche Ex-libris Gesellschaft in Germany, or the American Bookplate Collectors and Designers Association in the USA. They publish magazines and books on this subject and organize competitions for artists. Fake booklets made for non-existent people or dedicated to celebrities but never taken or used by the owner are called “fake exlibris” and are prohibited contests. Why do exlibris, or someone did? Ex-libris has been a continuous tradition for over five hundred years. It is a challenge for an artist to produce a small graphic artwork that has a special purpose for a friend, a customer, or for himself: to identify the owner of a book. Sticking a beautiful exlibris to someone’s books not only discourages theft, but also reminds borrowers that a book should be returned, but despite modern communication technology, it is the transmission of information and a constant source of pleasure and interest. As a collection object, ex-libris is a great way to acquire a small-format art museum that reflects the artist’s skills and the collector’s taste, with time and patience and without a millionaire. 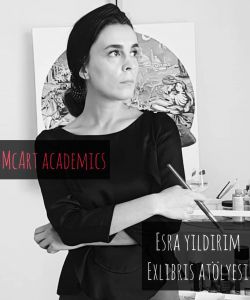 ESRA YILDIRIMTRAINER
In 2006, she graduated from Uludag University Faculty of Education, painting and teaching. In 2015, he completed his master’s degree at Karadeniz Technical University, Faculty of Fine Arts. He started his doctorate program at Marmara University Faculty of Education in 2017 and still continues. She is working as a painting teacher at Istanbul Başakşehir Fine Arts High School. He has participated in various exhibitions, congresses and symposiums at home and abroad. His articles have been published in various journals.
Toggle Sliding Bar Area